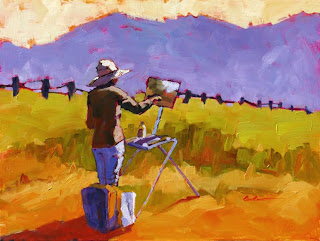 Ha!
My classes started last week- and just in time. When my motivation is a little low teaching keeps me on track. We are trying to make the most of the good weather and last week painted out at Wayside on the north side of Alamosa. Sue McCullough joined us as guest artist and ended up as my subject. Check out her blog to see the piece she did "Plein Air of the Dairy".
Saturday, Sue and I will be up in Salida for a week painting at the Colorado Mountain Plein Air Fest. If you are in the area on Saturday the 26th, there will be a Quick Draw at 10am in Riverside park, historic downtown Salida. Quick Draw work as well as work from the week will be on exhibition all weekend at the Virtuosity Gallery on 106 North "F" St. in Salida.
Posted by Pleinview at 9/18/2009 No comments:

What's A Painter To DO? 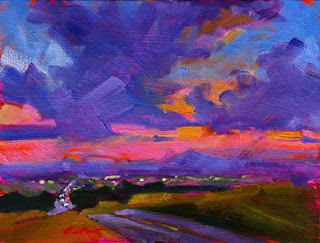 Summer is gone and we are definitely into Fall. Sunday morning the San Juans were covered with snow. YIKES!
Time is flying by.
After traveling and painting for many weeks I come home tired but still mentally going, trying to rest while preparing for the Colorado Mountain Plein Air Fest in Salida next week.
This is a "meantime"- a forced wait and it can be very hard to suddenly shift out of overdrive into neutral.
Everything in me says to be 'out there'- paint everyday, get busy, plan now for shows to come, work on marketing, update the mailing list. . .
So much to do, so little time. Hmmmm . . .

When I graduated from design school I was working in the Creative dept. of a large, Japanese toy company only a few years in the U.S. and very successful. They built a new warehouse/office facility while I was there and the Engineering Dept. was slated for prime office spots along the windowed portion of the building. After moving in however, the executives, both American and Japanese met and to my amazement, the engineers were moved out of the windowed space and Creative was moved in; believe me this did not go down easily.
Even more amazing to me at the time was that the Japanese executives insisted - "artists need windows to dream".
I thought of that recently - in the light of this "meantime" - and the struggle to strike a balance between what I want to do, what I can do and what I need to do.
Coming home after many events can be like returning from another planet especially when you are exhausted but I am the only one who can give my self permission to stop running.
I think this 'meantime' will be my window where I watch clouds go by - but don't have to paint them.
At least not until next week.