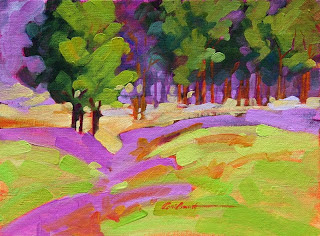 Well, I have been trying to get back up to Zapata this week but it was not to be. First we scheduled a paint out for Wednesday but there were too many impediments; then Friday but that won't work for other reasons so I am resigned to looking again at my back yard and the surrounding marsh. I was inspired by some of the paintings in the PAAC show that could have been painted there - I had never seen the possibilities quite that way. On the way back from Denver Sue and I discussed that very thing: bringing something fresh to familiar material; trying to make something out of nothing. I think that is what separates the men from the boys.
This is a 9"x12", Marshwood.
Posted by Pleinview at 7/16/2008 1 comment: 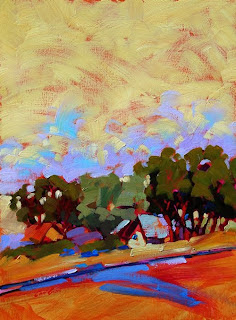 The 12th Annual PAAC Show (Plein air Painters Colorado) opened at the Abend Gallery Friday night in Denver. Sue and I had a great time; the show is very good - and beautifully hung.
Awards for Best in Show, 2nd and 3rd Place, as well as Honorable Mentions, had already been made by the show judge, but during the opening reception, patrons as well as the artists voted for the final awards of - People's Choice and Artist's Choice.
My painting "On the Tracks at LaVeta" won the Artist's Choice Award and $500 cash prize. YIPPEEE! I am so honored to have had this piece chosen as the favorite by the other artists in the show and could not have been more thrilled if I had won Best in Show.
Thank You to the PAAC, to Wes, Leslie and other members who put it together and to the Abend Gallery for hosting, hanging and putting on a really nice opening.
The entire catalog of work can be viewed online at www.abendgallery.com. Check it out.
Posted by Pleinview at 7/13/2008 No comments:

Alamosa Recreation Center is closed until further notice, however Outdoor Plein Air Classes will start:
Tuesday Evenings, June 30, 6:30-9pm and
Thursday Mornings, July 2, 9am to noon
On Tuesday Evening, June 30, We will meet on the west side of the ASU campus, where Edgemont Blvd. meets Hwy 160, across from the Conoco Station.
Thursday Morning, July 2, We will meet on the east side of the ASU campus, in front of Leon Auditorium, near the intersection of Richardson Ave. and 2nd St.
All registration and payments will be made directly to me at the location and I will have painting location schedules to hand out.
If you you have questions, contact me thru my website at: www.ConiGrant.com