A Day in Taos 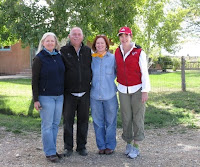 PAPNM, Plein Air Painters of New Mexico Show at the Millicent Rogers Museum in Taos drew painters and friends from all over. On Exhibit until November 14th, it is a show worth seeing if you are in Taos this fall.
Several of the High Desert Painters were in town after painting at Ghost Ranch the previous week and taking in the show. They rented a ranch house between Arroyo Seco and Arroyo Hondo and on Monday after the show opening Sue McCullough and I drove back to Taos for a beautiful autumn morning of painting with them in New Mexico. At the top are Judy Howells from Southern California, Nelson Hubley of Nova Scotia (yes, Canada), myself and Jana Van Wyk of North Carolina. This view looks north/east toward the mountains where aspens are dotting brilliant yellow and below, Judy paints with a friend nearby.
It really was an exceptional day and sadly, the last day of painting for me this season. I took a jump off the ranch house porch, onto a step that gave way, did a little tumble and (revealed later in x-rays) broke 3 metatarsals bone in my foot. Of course, not being able to walk should have been my first clue. Tra la.
So I am off it,
and just about everything else for 8-9 weeks.
I did learn to spell 'metatarsal'. 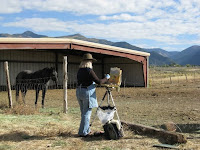 Below is the painting I was working on at the time of my unlucky leap - fortunately, nearly completed.
Titled "Monday in Taos", this piece sold later at the Plein Air Artists of Colorado Show- in Denver. 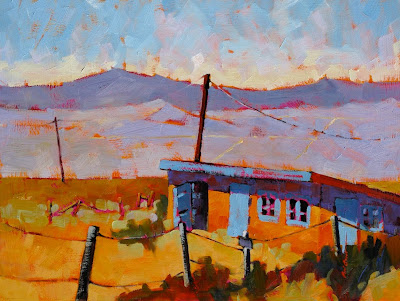