The last couple of years have seen a big explosion of the "plein air" phenomenon. Everybody's doing it!  And to stay in step, or to keep up with the trend, some are - that shouldn't and many should that aren't.
So what's it about?
If you aren't familiar with the term- it simply means to paint out doors/on site.
As a kid, painting and drawing at the back yard picnic table, it would not have occurred to me to do anything else but try to make images based on what I could see. In college, the best classes sent student artists tramping into forest and field, to the docks or downtown to make the best of what was in front of them. The lessons of direct observation were hammered out back in studios, but it all started with learning to see.
Whether painting en plein air (outdoors), from a live model, or from a still life set up in front of you, direct observation reveals things that cannot be seen or gained from photography or taught by any other means.
This was the whole idea that drove the Impressionists into the landscape, seeing from LIFE. That particular group of painters called Impressionists, did work defined by Webster's as a "style of late 19th-century, characterized by short brush strokes of bright colors".
Whoa! That is a pretty terse definition for a group of artists who were actually less technique driven but gave us the philosophical ideas about artists - that today, we take for granted.  The Impressionist ideas of artistic freedom - not defined by politics or fashion, propelled art and artists into the Modern age. But I digress. . . .
They were impelled by the need to SEE, not rely on the formulas of the past that had long since parted ways from anything having to do with direct observation.
Recently, I participated in an outdoor quick draw and met a local artist doing the event because they felt they SHOULD- for self promotion. What a shame. And YES- that artist SHOULD have been painting outside - more because their studio work lacked freshness or the breadth of light and color variation that comes form outdoor observation.  For this artist, it was all about getting on the "plein air" band wagon, instead of using landscape observation to improve the studio work.  Maybe we all do that sometimes; we hitch our wagon to a current trend.

So the question I ask myself is: Why PLEIN AIR?  If for its own sake - we are just a bunch of painters, taking studio formulas and standing in the landscape. 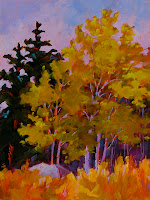 There IS a real benefit to going out doors. I don't want to forget that next time I am scrambling to get my name in print or jockeying for position with a group of painters lined up for a event photo.


This plein air piece done in the Rockies last year, sold out of my studio this week - that's a good thing - but I had planned to enter it into a gallery show this August. Hmmmm. . .
So, my intention is to recreate it in the studio, from the sketch.
The challenge here is to resist the desire to "fix" things but make it true to the original in freshness and life;  that may prove harder than it seems.
. . . and ps. it will not be billed as a plein air painting. That fact to me is incidental but I will try to capture that plein air vigor.
Posted by Pleinview at 7/07/2012 No comments: 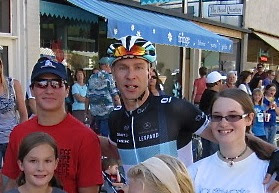 July has been amazing in France. I am getting up at dawn every morning to view some of the most beautiful landscape in the world- not painting tho'; it is Tour time and we are big cycling fans at my house.  We all sit in front of the tv to watch live feed of the Tour de France and for 3 weeks my heart and mind are virtually in France. Each day when I head off to the studio I feel like I have had a mini European holiday. 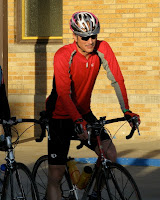 Jens Voigt above with my kids (the 2 tall ones) last year at the Colorado Pro Cycling Challenge and below, my husband, and the star biker in our household heading off to ride a local century race (100 miles).
Posted by Pleinview at 7/07/2012 No comments: