Hazards of the Trail 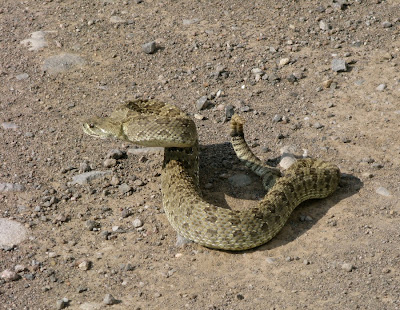 Sometimes the hardest thing about a day is the view: finding it, trapping it, painting it - but there are other hazards: cows moving to new pasture, drunk campers, weather. This day, on our way up to Rock Creek, Sue McCullough, David Montgomery and myself, made a stop for a friend, coiled up in the middle of the road.
I saw snakes, of all kinds in California, but this is my first Rattle Snake here in Colorado - and it gives one pause. They like to sun in warm spots, like the middle of the road, or find the cool in the underbrush - so, be careful where you step when finding that perfect view.
Posted by Pleinview at 7/30/2011 2 comments:

Last week Sue and I went back up to Rock Creek for a morning of painting. I have been looking at streams and little waterfall configurations lately; to practice something I haven't done a lot of.
My first interpretation of this view is a few posts back, but I like this one much better and also like the 1 x 2 format better as well.
This piece is 6"x 12". 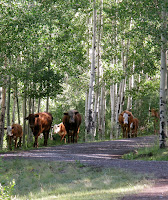 You can see my set-up and sketch in the photo at the bottom. About the time I got really into painting a herd of cows came up the road at my back. In an effort to avoid me and still cross the stream, there was a lot of mooing and thrashing around.

The TRADE is not an emotional buy, it is a negotiated buy.
The person that you are doing business with might never have purchased a painting from you - either directly or in a gallery - on their own. Part of what you are offering is a unique opportunity.
You may be saying to yourself -
"no one would ever take my work in trade",
but you might be surprised. If you have ever SOLD a piece of art, or are currently being represented by a gallery, your work has value.
Most people, even those who don't buy art, have a sense that good work has value, and that it might even appreciate in the future.
So, if you want to use your work for a possible trade,
first get a good idea of it's fair market price.
The retail value of a piece would be the price set in a gallery. Most artists get 50- 60% on work that sells out of a gallery and that could be considered the wholesale value. Know what you have before you jump into the game.
This Spring I was able to negotiate a trade with a local concrete contractor for a new driveway- probably my biggest trade yet.
I went about it by first getting a bid for the work.
From experience, I know that roughly half of his costs are materials and the other half labor. It isn't reasonable to expect to trade for the entire amount but it might be possible to propose a trade for half.
Once I had his bid I figured out what I could offer that would roughly equal half and worked out a proposal from there.
From my point of view there is nothing to lose here; all he can say is "No" and I haven't lost a thing. So if the party you approach does not want to trade - don't take it personally; this is a business deal, not a passion purchase.
In the end, I found out that the wife of my contractor had seen my work locally and liked it. That helped!
I am also fortunate that my work could be viewed in a gallery within driving distance, so they could easily see, both the type of work I was proposing and also get an idea of its retail worth.
It was surprising but also very gratifying, when the couple decided to go through with the trade and once that was decided it went forward almost like a commission.
I would make one thing very clear here: the decision to trade services for art was made and put in writing, with the bid, BEFORE any work started. If you are thinking of negotiating a trade, propose it at the start; don't pull up at the last minute with art instead of cash; VERY bad form.
My driveway was installed and we talked over the kind of painting that would be suitable to his taste, but also to the trade amount in question.
At this point I can be very flexible because, essentially the art has been paid for, up front.
In the next post about 'Art of the Trade', I will talk more about my trade negotiations and the actual art involved.
Posted by Pleinview at 7/24/2011 2 comments: