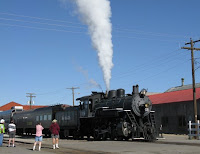 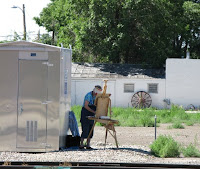 Last Thursday 6 of us made the Alamosa Train Station our painting destination. If it isn't enough watcing the locomotive work up a head of steam, it is fun to be a part of the excitement of train enthusiasts, all ages, preparing to board the Alamosa Scenic Line to LaVeta. The train takes off at 9 am so after a flurry of excitement we had the station to ourselves.
My piece, at the bottom, is a view south of the tracks; again a small panel - 6"x 8".
Posted by Pleinview at 7/22/2009 2 comments:

By way of introduction, David Roberts, an online friend I met through this blog, who frequently comments and gives thoughts on the artist's journey, shared this wonderful bit of personal nostalgia.
I wanted to share it with you all because it brought up so many memories of living near the tracks, in California and here in Colorado.
Thanks David.-------------------------------

My home town, Crystal City, Texas, about 90 miles south and slightly west of San Antonio was bisected by a main street which was really just the two-lane highway running through those parts, paralleled by multiple train tracks. Being an agricultural center for onions and spinach (a statue of Popeye stood in the park), the trains were the lifeline for this little hot, humid Texas community in the
30's, 40's and 50's.
Shopping trips on foot with my Mom or Aunts meant crossing the dreaded railroad tracks...something I adored and feared both at the same time as a small child. I was drawn to the power and noise of the big steam locomotives parked on a side spur while the cars were being loaded with produce from the packing shed, but I was also terrified to cross in front of them. The boilers were kept going at all times which meant that even idle, the engines would occasionally 'belch', letting forth with great explosions of steam and fury. Mom had to hold my hand tightly so I didn't bolt and run, but after I calmed down, I would also look back in anticipation of the return trip on the way home where I knew I'd get another jolt of adrenalin from these marvelous clanking, groaning beasts, now long gone.
But the best part was lying in bed at night with the windows wide open for any cool breeze and hearing the distant wail of an approaching train. It would wind its' way down from the north, and you could hear the whistle growing louder with each successive road crossing. Finally, the puff, puff, puff would grow slower as it pulled into town, bell ringing all the way and come to a stop in front of the onion-filled packing shed for a night of furious loading. All night long you could hear an occasional steamy shudder and jerk, jerk, jerk as the old steam engine advanced the cars one by one.
Those were the best nights to sleep,
for a kid who both loved and feared those great mechanical monsters!
Posted by Pleinview at 7/22/2009 1 comment: 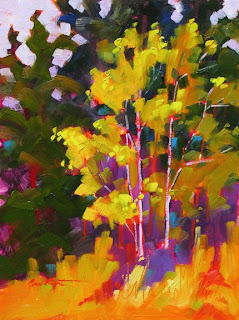 Winning is always fun! My "Zapata Aspens" took a Merit Award at the PAINT COLORADO Show that opened in LaVeta on Saturday night.
Tim Deibler, noted Colorado painter, judged the show and was at the reception, which certainly added something special to the evening.
Tim is an astute critic and teacher, and was willing to talk about our pieces - if we wanted to hear. Having your work "criticized" may not sound like fun, but having a master/painter and judge tell you exactly why your painting worked, or not - SO worth it.
For me, this was the highlight, and most valuable part of the evening.
As an aside, we did not talk about this piece, but my other entry, "PileUp on LaVeta". Tim Deibler was also a Juror for the PAAC Show that opened at the Abend Gallery in Denver last weekend. He looked at over 300 paintings entered in that show, remembered mine, and could speak directly and knowledgeably about them. Thanks Tim.
Posted by Pleinview at 7/21/2009 No comments: