On LaVeta Pass- Yes, it was COLD! 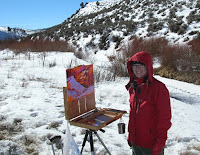 Wednesday morning David Montgomery I went up to LaVeta Pass looking for some open water, a snow bank with red willows - or any view that didn't require standing in 3 feet of snow. About 10 minutes out of Ft. Garland we found a little creek frozen over a beaver dam, not far from the road. David took the beaver dam in view and I focused in the opposite direction toward a snow bank with willows. Thankfully, the morning was sunny, and we both started strong but the wind really whips up that pass and the wind chill was bitter. You can see in the photos that we barely got more than a lay-in.
About that time I heard a cappuccino calling my name and I really don't know who was the first to suggest it but there wasn't much discussion -
we were ready to bale.
A little while later we were answering the call-of-the-wild-painter for . . . . .coffee.
My painting is below; obviously the piece had to be brought up to speed in the studio. I had done a black and white sketch in the field and, as is my method, that sketch is painted on the panel in black acrylic and a color under painting is put over that, before working with the oil. The piece didn't paint itself but the hard part had been done on location, the bones were all there and I was able to wrap it up while the inspiration was still fresh. 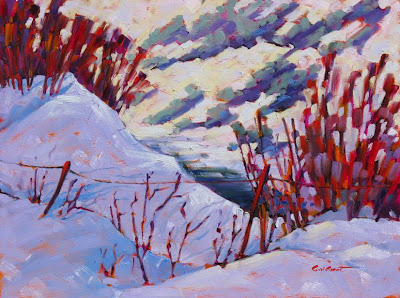 Coni, you guys are my heroes! Standing there in the cold, putting frozen paint to frozen canvas. I love what you produced, and I love knowing the conditions under which you produced it.