Eldon - here they are,
at least a few, and the jury is still out on those. Sue McCullough and I hit it pretty hard, painting about 3 a day. We started 2 mornings before dawn, hoping to beat the wind but in the end our days were beautiful. We did get caught by a sudden storm while painting on the mountain near Pilar - nearly lost the easels but got everything thrown in the truck before it really began to pour.
At the top is one of those early mornings around the San Geronimo Lodge and right below here is a long view toward Rancho de Taos, done near the end of the week. Next to that is my interpretation of the Gorge. Jeannie Breeding was standing conveniently in my view, and later bought that piece. Thanks Jeannie. 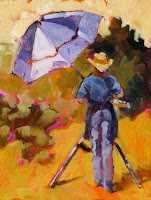 Now that's what I'm talkin about!! I really like the early morning view of the mountain. The one from around San Geronimo Lodge. And I can see why Jeanne bought your piece of her "in the way". You guys must have had a blast. Maybe next year.
Looking forward to seeing more sometime soon.
E