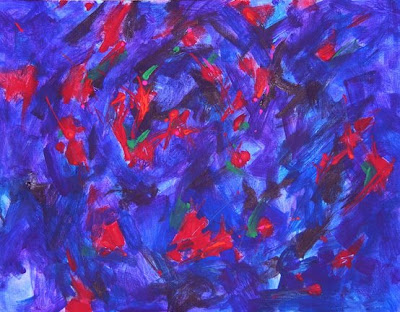 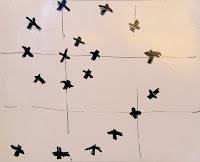 This final compositional idea is very loosely based on "Golden Sections" placed in a Fibonacci series positioned to create a logarithmic spiral, or nautilus. That's tech-talk for my black and white diagram at right.
Some background: Leonardo Fibonacci, in the 12th century, discovered a numerical series that, starting with 0 and 1, each new number in the series is the sum of the two before it. That is the foundation for the mathematical relationship behind phi but is also visually linked to the "Golden Section', rectangle, mean or what ever you want to call it. To read more, Google "Elements of Dynamic Symmetry", "modular", or "Golden Section".
The great 20th century genius designer and architect, Le Corbusier linked the spiral and its ever expanding compositional space, to its natural counterpart the nautilus.
As with most compositional ideas that I use, this starts with dividing the space into thirds to create the grid (the one loosely based on the "Golden Section") to hang our spiraling points on. This device can also be used in a landscape or still life by placing defining elements, maybe where 2 lines meet or complement colors sit side by side, on the points of the spiral. The idea is to subtly lead the eye of the viewer to the center of interest. In non- representational paintings it creates order in what may appear to be chaos. The points like bread crumbs, lead the viewer to the center of interest. Sometimes it is quite subliminal;
and we thought that only happened in advertising. . . . . . . .
Posted by Pleinview at 12/22/2008

Well this was definitely the math-for-painters lesson. I was amazed how interesting it was and how dynamic the actual act of painting became with this information.

To me it seemed to be a natural way of development and I am wondering now whether it is the basis of many classical and earlier paintings.